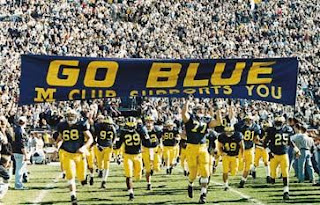 I have been a UofM Football fan since I was old enough to hold a football. Although we lived in Spartan country, growing up we were a maize and blue house. One of the people I admire is legendary coach, Bo Schembechler. As a coach, he led the Wolverines to 13 Big Ten titles and 10 Rose Bowl appearances through his intensity, drive, and dedication to the game and the team.

One thing I remember most about Bo was his famous "Team" speech. It is this speech that defines, for me, what it takes to be a part of a team. In his speech, he drives home the point that one person does not make a team. No one on the team is more important than another. Everyone's job is important. In a team, you don't criticize, back stab, or cut each other down. You build each other up and support each other.

We did some of that and will continue to do on our team as we fill each other's buckets, but there is even more to it than that. To be a part of a team,
you have to be active. There is no passivity on a team. What if the quarterback threw a pass and the receiver just stood there and watched it? He is not an active part of the team. It takes all members of a team to get results. Good results.

Being a successful teammember is not just a role, it's an attitude. It's a dedication to the team, and an understanding that we all have an important part to play. We are all valued, and so we must hold on to that attitude and let our actions show that we are worth valuing. Sitting back and letting others take on extra duties or pick up the slack does not make a successful team, whether you encourage them or not. Remember, fans sit on the sidelines and cheer. Does that make them part of the team? Not in my mind. Teams work together like well-oiled machines. It takes everyone. We synergize, and we get the job done. This month, become an active teammember. Let's go out there and win the game...for our students!